Future of work: Hierarchical leadership is part of an irresponsible game 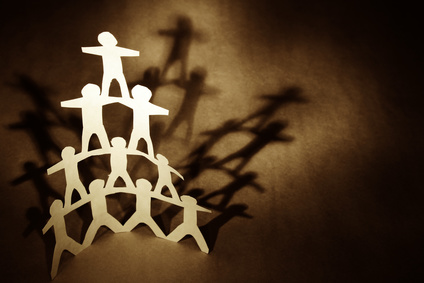 In a grown up working world bosses are obsolete

I want to begin with a warning: this article could be a little bit uncomfortable. Therefore, if you like it comfortable, you should stop reading. Recently I read an article titled “Why flat hierarchies are just a continuation of barking up the wrong tree”. In this article, the author Niels Pfläging writes about the advantages of decentralized organizations instead of hierarchical organizations. In the commentary section I found an interesting message of a reader, who wrote that, whenever he has a discussion with leaders about that issue, they tell him, that people need leadership and therefore also need hierarchy. This comment found approval by many other readers, who made the same experience.

As a leadership trainer, I also agreed upon this assumption for a long time, without really questioning it: “People need leadership.” But is that really so?

Very simple: hierarchical systems are the basis of irresponsible and non-adult social interaction – it is the playground for an irresponsible game in which the players don’t (have to) grow up. Perhaps now you think: “Oh come on! Not grown up? But we are all adults!” That’s not totally true! Perhaps we are of age, yes, but not necessarily grown up. Our society, the way we grow up and our education do not provide us with the possibility to make a conscious initiation into responsible adulthood. In addition, hierarchy does not include the intention that people grow up and become self-responsible, because by doing that hierarchy itself would become obsolete. There is too much to lose for the players who draw profit out of hierarchy! And if you think that only the rich and the powerful benefit from hierarchy, then you are totally mistaken. Because if we all would not have a lot of hidden unconscious benefit from the game called hierarchy, we would have stopped playing it a long time ago. But we didn’t!

Let us first take a closer look at the employee’s side. When people come for a coaching, I ask them what motivates them to work. And in most cases, these are the top 2 answers:

Recognition and safety. Does that sound familiar? When I ask my clients what they really need – not what they like to have, but what they think they really need, it mostly is also these two: recognition and safety. That’s what most people are working for and of which they believe, that they need it more than anything else. What I say now could be painful. If these are the two things, you are working for and of which you think that you need them more than anything else, it is most likely that you have not yet completed the step from childhood into responsible adulthood. Because to follow your calling, which is one quality of a responsible adult, has nothing to do with recognition or safety! If that is what you are working for, it is likely that you still are stuck in a child ego state. And you are definitely not alone! Because this is what we are, growing up in Modern Western Society!

Recognition and safety are the two things we need most to survive as children: in the form of nourishment, cosiness, affection, protection, belonging, etc. Without these factors, we would not survive as children. Therefore, we adapt as best as possible to our parents – the authorities in our life – and develop different survival mechanisms.

With the age of about 15 we would be ready to grow up and to take over the full responsibility for our life from our parents. We would be able to develop our own authority and to become radical responsible adults not looking for recognition and safety outside of us anymore, but passionately and full of curiosity dedicating our life to the unlimited possibilities waiting for us beyond safety and recognition. Instead, we stay unconsciously within the child ego state of survival and continue looking for something outside of us – in the form of a substitute dad or mom, which we often project on our bosses.

According to a study, the boss is one of the most important attachment figures for a person ranking directly after the parents and the partner. No wonder as we project the parent’s role on them. Moreover, our irresponsible labour system with hierarchical organized employers, dependent working models and a so-called social safety net is providing the fitting environment for this game. We give our authority and responsibility away to the boss or the company, we adapt our behaviour as best as we can, we don’t have to make decisions and we feel safe. While our soul is withering.

But what about the other side of the social interaction? Also the leaders and bosses within hierarchy are not really grown up and responsible – even if in our society leadership is connected to responsibility. It’s the same thing on the other side: leaders are also people looking for recognition and safety, only that they don’t use projection of the parent role but they themselves adopt the parent’s role. They draw recognition and safety from their position as a leader, the position of power.

For them it is necessary that employees stay in the child’s role and that they give their authority to the leader. Leaders in hierarchy do not really want their employees to grow up or to become self-responsible. Because that would bring up the risk that they lose respect or that somebody tries to replace them. In hierarchy leading positions are scarce goods. Hierarchy is a context which is based on scarcity, rivalry and competition, automatically nurtures so-called shadow principles and easily leads to battle, war and low drama. Hierarchy creates status – high status vs. low status – and like this it is the feeding ground for the most popular and unconscious game of persecutor, victim and rescuer.

Therefore the assumption that people need leadership is valid within hierarchical structures! And this assumption and this game produces the well known results in our working world and economy.

The real problem although is situated on a different level. If we want to produce different results, we have to have a look at that level. If new approaches, like Self-Organization, New Work, Holacracy, etc. shall work, we need a grown up working world. Because if we just dissolve hierarchy and leave everything to self-organization and at the same time we stay within our needy child ego state looking for recognition and safety, it probably will not work. To create a new working world a new working model, it is necessary to promote evolution on different levels at the same time:

What does radical responsible adulthood mean?

To give you a feeling, what radical responsible adulthood means, I would like to quote Evelin Rosenfeld from her book “What really matters to you”:

Can you say YES to the attitude of complete self-responsibility?

It does not only mean that you stop …

It also means, that you make sure using all your resources, …

It means to lead a self-determined life and to enfold the abundant potential of your life.”

I would like to rewrite the assumption “people need leadership” …:

Children need parents, giving them love and safety, being with them, setting boundaries and holding space for them, so they can enfold their inherent potential.

Adolescents need mentors, holding space for them so they can complete their transformational initiation into responsible adulthood.

Initiated adult men and women don’t need leadership! They don’t need any authority outside of them, because they are their own authority. They need a team of co-creators at eye-level to bring their vision into reality. From time to time they need a mentor, a coach or a space-holder, supporting their personal evolution.

Adult organizations don’t need leaders or bosses. Instead there are initiated adult men and women working as space-holders, who are inspired and willing to put themselves into the service of the common vision. Unlike traditional leadership space-holders provide a space where all participants are empowered, nurtured, centred and highly inspired, to co-create for the benefit of the common vision.

Sounds like a dream? Yes! And it is already happening!

For a new working world!