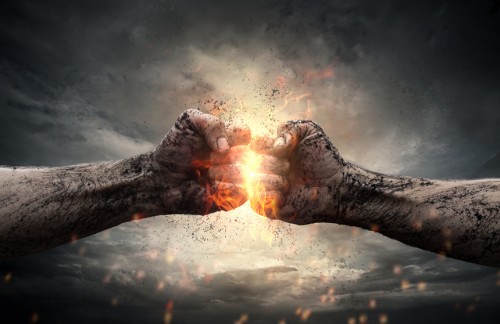 If you try to avoid conflicts, you’re trying to avoid life

Do you like conflicts? We could live happily without them. At least we often think that, when conflicts arise on the horizon of our lives. Why must life be so complicated? Why can’t we just lead a quiet peaceful life and be in harmony? Somebody always turns up and makes life difficult for us. Or we make our life difficult ourselves with discontent that triggers an internal conflict in us. And then life gets tiring again. That’s at least what we have learned about conflicts. They are exhausting and dangerous. There is a lot to lose, if there is a conflict: our status, our position, our relationships, our money, etc. In the worst case – if the conflict escalates totally – we might even lose our lives. Reason enough to avoid conflicts as much as possible!

Another reason why we shy away from conflicts, is that they are strongly associated with feelings. Anger, sadness and fear are constant companions and sometimes also the cause of a conflict. And if we consider these feelings as negative, we will automatically also consider conflicts as negative and we will try to avoid them as much as possible. If we numb ourselves regarding our feelings, we will also numb ourselves in regard to conflicts. Then we do not notice an arising conflict for a very long time. Sometimes the conflict has already escalated, until we even realize that something is wrong. At the same time our ability to respond appropriately to conflicts is not very common. And so we normally respond with our automatic behavior patterns on conflicts and so the conflict ends in dispute and quarrel. This in turn maintains our negative view on conflicts – a vicious circle.

But what are conflicts actually? A conflict occurs, when two seemingly incompatible perspectives, opinions, objectives or positions meet. Whether between several persons or groups of persons as an external conflict, but also within a person as an internal conflict. Conflicts just say: here is a difference, an imbalance, a tension between two poles! Nothing else. The conflict itself is neither good nor bad – it is just an indicator, that reality itself and our vision of how reality could be, differ at the moment. The conflict just informs us, that eventually there is a necessity for change.

And the feelings, coming with the conflict, could provide the energy, to take appropriate action steps for this change, if we are able to use them consciously and responsibly. Anger we could use for example to provide clarity and to set boundaries. Sadness we could use to get in contact with the other person and communicate authentically or to find out, what greater principles connect both sides. Or we could use sadness also to let go of old habits and positions and to open ourselves to the change. Fear could serve us to proceed with caution and to find unusual solutions to resolve the conflict. Etc.

Even nature uses this potential that lies in balancing a conflict, in balancing the tension between two states or two poles. Just think of a thunderstorm, the process of osmosis, electric power generation or simply even to the process of evolution of living beings, which leads to an adaptation to a changing environment. In harmony itself there is no energy for creating – it needs a tension, a difference to generate the necessity of balancing and thus the energy for change. Nature therefore would never prevent tension, but it uses the energy contained in the tension to get to a new harmony. When we take this perspective, conflicts become a law of nature. Life and evolution would not be possible without tension and conflict! In this regard, conflicts are nothing else than catalysts for evolution!

If we try to avoid conflicts and don’t even notice them, we are trying to avoid life and evolution. The conflict does not go away like this. It gets even bigger and escalates, because evolution in this case needs a bigger tension and a bigger amount of energy to generate the necessary change. Like this, conflicts get a completely different meaning, than the traditional perspective, that makes us hate conflicts. Then the only question is how to deal with conflicts. The first step in any case is to change our perspective:

The second step is, that we learn feel again, in order to use our feelings consciously and responsibly, to constructively transform conflict into necessary change processes. And also new communicative tools would be very useful, for not falling into the trap of our automatic patterns that lead more likely to quarrel and fight.

At the moment there is a conflict between nature and our modern society, that still wants to believe in the paradigm of the unlimited growth. Most of the people, who live in this society, close their eyes in regard of this conflict, hoping that it will go away like this. But this will not happen! On the contrary, the longer we ignore this conflict, the bigger the tension gets and the bigger the amount of energy will have to be, that evolution needs to get the necessary change going. If this conflict escalates, we will probably pay with our lives!

So, let’s face it and go through it together.