To be a leader means to go ahead 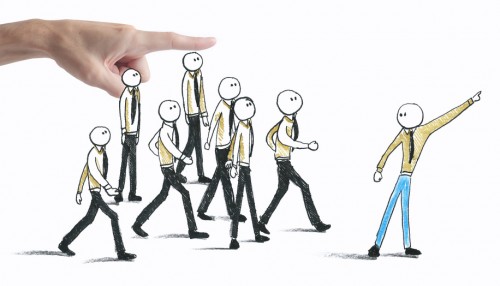 Leadership is the highest form of service – part 2

We have all kinds of ideas, what a leader should be like. And these ideas are usually based on the currently valid culture we live in, even if we are not really aware of it. Our current management culture is still based on the principles of the industrial revolution – dating back hundreds of years – and on the foundations of patriarchy – dating back still further. The global impact this form of leadership has brought with it, is clearly visible when we take a look at the state of our planet and our society.

The traditional style of leadership is an obsolete model, whose days are numbered. I know many people who say that they do not want to lead because it is too exhausting and they could not enjoy their private life anymore, because they will be held accountable if something goes wrong. This attitude becomes obvious when we look at the old management model in detail. Leaders in this model are alone – because the model is based on hierarchical pyramid structures, which means that upwards the air gets thinner and the leadership positions get increasingly rare. On the other hand, it goes along with higher wages, reward and glory, the further into the pyramid you climb to the top. This reward is considered as a compensation for pain and suffering for the fact that the higher up you climb, the more you can be drawn to account for mistakes that happen. This leads for example to the following behavior of leaders:

And the system maintains itself by the fact that under these circumstances the ones rather mutate to adapted followers, who have their peace, and the others are rather lonely and in danger, but enjoy power, fame and money. It fits well together, right?

The good – or bad – message: more and more people realize that this ancient form of leadership does not work anymore and is not sustainable. Dictators are overthrown, irresponsible politicians go to jail and employees leave their companies because they are not satisfied with their leaders. The signals are clear – but what kind of leadership culture comes next? We do not know! And to achieve the transition into the next unknown culture, we need leaders of a different kind. People who are willing and able to go ahead, into unknown territory without already knowing how it goes! The leaders of the next generation are edgeworkers, bridge builders, pioneers and culture (r)evolutionaries! Perhaps you are such a person?

What will characterize next generation leadership (edgeworking)? The following map is a first attempt to answer this question:

Such edgeworkers are needed not only in business! No matter which project you serve, what game world you have created for yourself – be it a family, a certain matter, you have committed yourself to, a social project, a department, a group of people with a common purpose, a company or perhaps a country – any type of game world needs edgeworkers who go ahead into the unknown and create a new reality, which the game world can unfold into, to serve its purpose.

It is clear that leaders of the next culture require unusual skills and soft skills that are not available in our ‘normal’ schools and training programs, as they themselves are still subject to the old paradigm of traditional leadership.Here are a few examples of this new soft skills required:

The new generation of leaders (edgeworkers) …

How about it?Does this job sound exciting for you?