Future of work – unemployment is part of an outdated working model 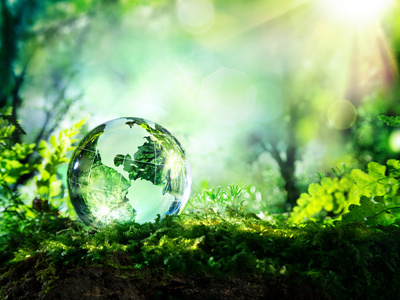 Are you jobless or unhappy with your job? Join the team of Planet Earth!

Unemployment is part of a system, which is about to dissolve. The system I talk about is our well-known labour system of dependent work with all its facets:

Apart from the unemployment issue, this sounds like a good and socially fair model, or not? Why then are so many people unhappy with their jobs? Why are cases of burnout increasing? Many people experience the well-known working world as a fight or a rat race for survival. More and more people start to question the purpose. Rightly!

This working model mainly causes one thing: it keeps all participants from taking radical responsibility, because it is based on profit, safety, survival and dependency, instead of purposefulness and fulfilment! It is a system, in which neither organizations, nor bosses, nor employees (have to) grow up. And of course it is also comfortable, because it gives us the possibility to tell victim stories about the circumstances instead of changing something.

The rules have changed

What if „joblessness“ is just a story? I know, especially when you are currently jobless this may sound perhaps disrespectful. However, I don’t mean it that way. It is an invitation to change your perspective – to look at things from a different point of view. Unseen possibilities often arise, when we change our perspective. Again: what if “joblessness” is a story based on the system of dependent work and which doesn’t exist beyond that system? As soon as you are your destiny in action, unemployment does no longer exist in your world. Because BEING your destiny in action is not something you DO, but rather a part of what you ARE. Your BEING is not dependent on somebody else. Your BEING does not know unemployment – you cannot stop BEING, only because you currently don’t get payed. Could you take this point of view? What would it mean for your life? Which possibilities would arise from this point of view?

Perhaps you did not yet notice it, but the working world is already changing. The well-known rules and paradigms are not valid anymore. Ross Perlin writes about this phenomenon in his article: “These Are The New Rules of Work – Forget everything you’ve always known about work. The rules have changed”:

Old Rule: You commute into an office every day.
New Rule: Work can happen wherever you are, anywhere in the world.

Old Rule: You have a full-time job with benefits.
New Rule: You go from gig to gig, project to project.

Old Rule: You work for money, to support yourself and your family.
New Rule: You work because you’re passionate about a “movement” or a “cause”—you love what you do.

Recently I attended an event on the topic „New Work“ in Munich. Over 100 inspired people gathered for an open space night to talk about how the future of work could look like and about how it is already being lived at some places. You see, the well-known world of work is about to die! Why not now make a change?

There is one provider of work, offering you enough work until the end of your life and in addition offering the possibility to live a purposeful life: Gaia or Planet Earth! Gaia is desperately looking for co-workers! Of course, there are no “safe” monthly wages and also no social benefits, because it is not an ordinary working model. It is a job only for self-responsible freelancers, following their inspiration. When you are part of the team of Planet Earth and put your talents into the service of evolution in an area that inspires you, then you will never be jobless again in your entire life.

Here is the job offer: 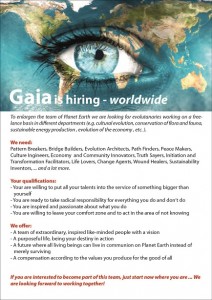 And, according to my experience Gaia cares for her evolution agents. When you use your energy to produce a value that is needed in the world – according to the physical law of conservation of energy – you will receive energy (= a value) back. Even if it is not at once and not always in the form of money, as you tend to expect.

These are some examples of people who decided to join the team of Planet Earth:

Everything started with an experiment. Lauren Singer (22) wanted to see, if it is possible to live without producing waste. She wrote about her experiences and discoveries in a Blog (www.trashisfortossers.com). Actually, after some time she made it to reduce her yearly waste in a way that it fitted into a jar. The passionate experiment changed into a purpose. Today Lauren lives from inspiring and teaching people to avoid waste in their everyday life. She creates recipes for toiletries, detergent and cleaning supplies and sells these zero waste products in her own company. The money for the foundation of this company she collected with a crowd funding campaign.

Lauren Singer is a team member of Planet Earth and she is her destiny in action – self-responsible, autonomous and following her inspiration.

Ben cancelled his studies at the university and decided to found his own university: the Blogging University for Change Makers (www.blogginguniversity.net)! He teaches people with talks, workshops and online courses how they can change the world following their inspiration with a BLOG and how they at the same time can live from doing that.

Ben Paul is a team member of Planet Earth and he makes sure that evolution and change is happening – self-responsible, autonomous and motivated by his inspiration!

When you decide not to be jobless anymore or to leave your current job to join the team of Planet Earth, it would be useful as a next step to ask yourself the following questions:

The result are two lists. When you combine these two lists you have different possibilities to put yourself into the service of Planet Earth.

Have a lot of joy with your new work!